After an afternoon of chilling at our resort, we drove over to Disney’s Beach Club Resort for dinner at Cape May Cafe. I’m going to say right off the bat, that we didn’t enjoy it much here at all. We had quite a late booking, so the buffet was looking past its best, and it felt like they just wanted to kick every one out. Of all of our dining experiences over the years at Walt Disney World this is #2 on the worst list – not for the food, because that wasn’t bad, but just the general feeling of the place. (Number one is held by Hollywood & Vine at Disney’s Hollywood Studios in 2011 – bleh)

As it happens, we were looking forward to this buffet, as had read several times that it was really good. Sadly, that wasn’t our experience at all. So I’m pretty much going to just show you photos that I too of the food, and how much everything cost.

There was a seasonal drinks menu, but the Harpoon Pumpkin Cider that Steve had fancied had run out, so we all just had fountain drinks, which are included with the Disney Dining Plan.

When it comes to the Deluxe Disney Dining Plan at a buffet restaurant you are entitled to one full buffet and one non-alcoholic beverage per person (usually refillable) for one credit per person.

Cape May Cafe is a New England style eatery, with a “Seafood & More” buffet. The buffet area is in the centre of the restaurant, set out in a square. You can walk all around, and help yourself to whatever you like. The selection of dishes can changes on different days of the week. Here is the latest offerings as told by the Disney website. 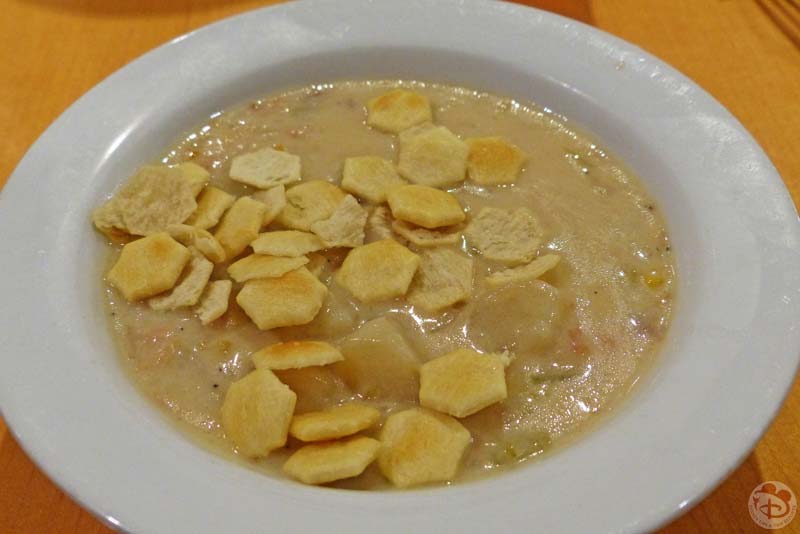 It looks like at least one of us had the soup, sprinkled with oyster crackers. I know we all enjoyed the peel-and-eat shrimp, and I am always a fan of Caesar salad at Disney.

I remember not fancying any of the seafood, which for me, is rather strange, as I love seafood. Instead, I had a roast beef dinner, with mashed potatoes, gravy, corn on the cob, and a bread roll. What Steve and Liam had, I do not remember now, as I don’t have any photos of their plates. Knowing the pair of them at a buffet, they would have had a bit of this and that.

We paid the bill, and on the drive back to Wilderness Lodge, we could see the fireworks bursting high in the sky above Magic Kingdom, which was very cool – Steve managed to get a couple of shots as we drove through the toll booth area. We could just see the fireworks from the front of the Lodge too.

« May Calendar Shot | May The 4th Be With You! | Disney Wordless Wednesday » My Disney Gift Card Collection