We didn’t have long before we would have to leave for the airport, so we made sure to watch Dream Along With Mickey (twice!) It’s been my favourite show at Magic Kingdom since our first visit in 2011 – but it’s now finished. I was so upset when I found out they were cancelling this show. I’m just glad i got to see it several times on this trip. 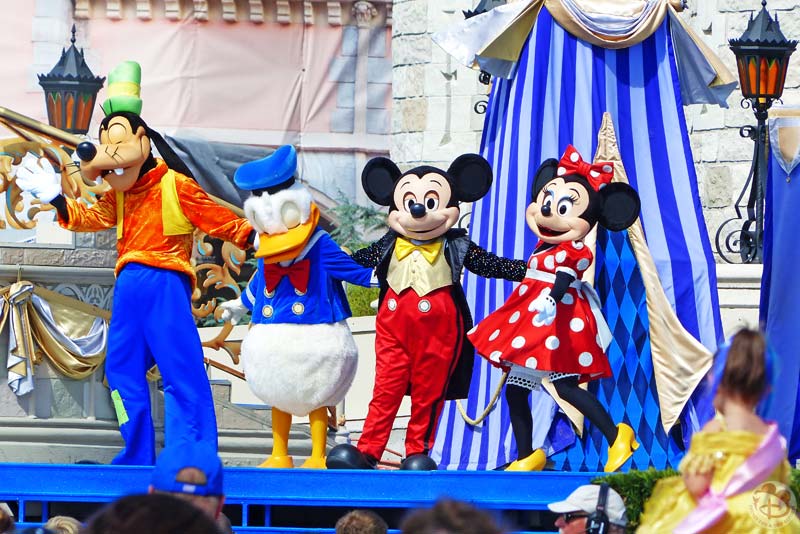 We also spent some time in Fantasyland, as this is part of the park we’ve not really explored before. The line for Seven Dwarfs Mine Train was way too long, but it looks like a fun ride. One for another trip! We bought a final snack each from Big Top Treats in Storybook Circus, and managed a quick ride on Haunted Mansion as I had booked a FastPass+ time slot.

I figure because we don’t have young children, this is the reason we’ve not been in this area before. It felt nice to be at Walt Disney World for our 4th trip, and still finding new things! In the circus themed area of Storybook Circus is a souvenir store called Big Top Souvenirs. Inside that store, in the centre is Big Top Treats – a circular counter with lots and lots of Disney Snacks! We had saved some snack credits from our earlier purchases of cookies and stuff, and bought a Disney Snack each, and a couple of drinks to use them up.

We bought an Olaf Cake Pop, a chocolate covered Mickey Marshmallow Wand, and a Gingerbread Mickey. If it hadn’t been our last day, I think we’d have popped back here to get some more sweet treats!

Since there isn’t too much more to tell, here are some more photos from this day. By the time we had got to the airport, I’d given up on taking photos. I’d managed to get myself into quite the anxiety attack, and just wanted to get home. Unfortunately, the flight home was not the most pleasant. We had a lot of turbulence due to a jet stream (or so were informed, by the pilot) and so the seat belt sign was on for pretty much the whole flight, and we barely managed to catch an ounce of sleep. Once home in the UK, my dad took a wrong turning somewhere, and that extended our drive home by about an hour… I have never been more pleased to see my bed in all my life!

I hope you’ve enjoyed reading along on this trip – my next one, for 2016, will be started in the next week or so. Until then… see ya real soon!

Read about the day after:
It’s over for another year – Read ALL the days!