Today was a very slow day – we had a long lay in, before getting ourselves ready to go down to the Hidden Springs Pool to hang out for pretty much the rest of the day. We had lunch from the Roaring Fork, which is the counter service place at Disney’s Wilderness Lodge. We were able to bring the food out on trays, and had our lunch pool side. Dinner was at Disney’s Signature Restaurant at Wilderness Lodge – Artist Point.

To that end, today’s part of the trip report is pretty much just photos of food!

But first, the Hidden Springs Pool. We discovered that there was a staircase at the end of the corridor nearest our room, that led right outside to the pool, which was very handy. So we walked down stairs with our stuff to hang out by, and in the pool. It’s a nice secluded spot, and was going to be closed off soon for refurbishment works at the resort.

We saw a black snake slithering along the path into the plants – never seen a snake before in Florida, so we just watched from afar! We also saw several lizards, which is the norm! This little guy was most interested in the small hole in the ground.

There are several tables and chairs around this pool, so the boys went off to get some lunch from Roaring Fork.

When it comes to the Deluxe Disney Dining Plan at a counter-service (quick service) restaurant you are entitled to one entrée, one dessert and one non-alcoholic beverage for one credit per person. 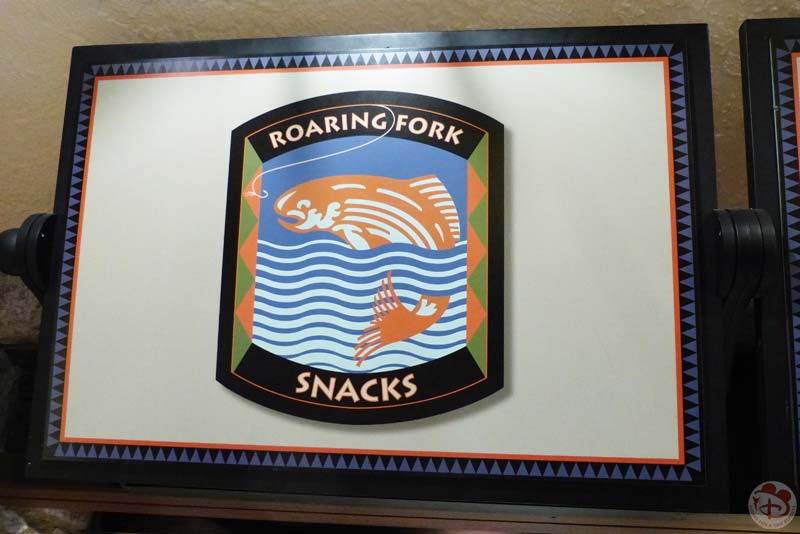 It looks to me, that since we hadn’t had breakfast that we must have been hungry, as we bought an extra meal – a salad, cupcake and drink. I imagine I would have wanted some veggies, but also fancied a sandwich too. I’m pretty sure that the desserts ended up going back up to our room to snack on later.

I don’t have it written down who had what when it came to desserts – it’s quite likely we shared them, or, as I said before, took them back up to our room. Looks like it was a chocolate brownie, a cookie, a cupcake, and some sort of pastry. We also had bottles of juice, as well as topping up our resort mugs with sodas.

As I said, it was a slow day today, just chilling out, and not doing much. I do like that now that we have been to Walt Disney World several times, that we can afford to take down days, and not feel like we are missing out.

We had a late dinner reservation at Artist Point, which is a Signature Restaurant at Wilderness Lodge. We have not dined here before, so this was a completely new place for us. I was very excited to see a stack of pumpkins at the entrance!! I know, I’m quite strange when it comes to my pumpkin obsession!

We checked in for our reservation, and were shown to a table immediately. Our server introduced himself, and was quite thorough in going through the menu. This seems to be standard when it comes to Signature Restaurants at Walt Disney World; as is a basket of bread and butter which is brought to the table.

The restaurant was dimly lit, and instead of the darker wood that is found around the rest of Wilderness Lodge, the wood in here was a paler colour. I’m sure there was something about that in the menu, or maybe it didn’t… I can’t remember now!

The food here was very nice, but the service was a bit slapdash. At some point it got a bit busy, and despite asking for refills for drinks, and wanting to get the server’s attention for a few other things, we found it to be quite difficult. I remember our server being quite forgetful too! 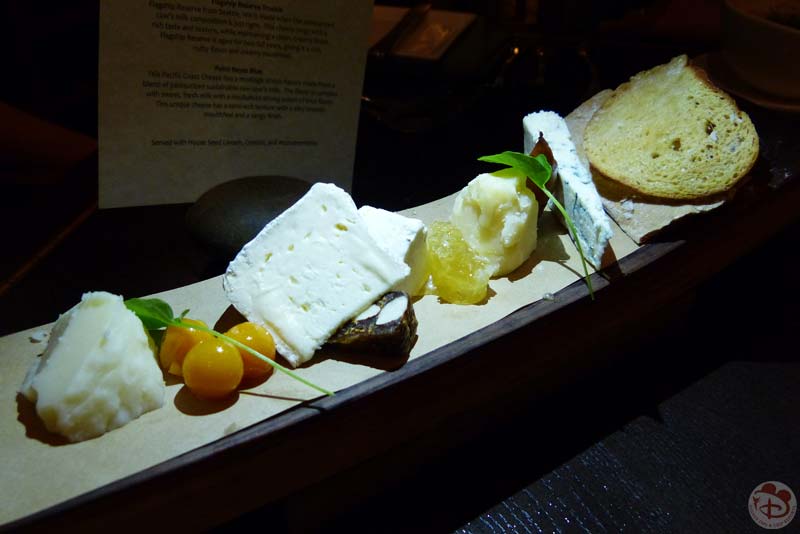 When we get a cheese or charcuterie plate at a Signature Restaurant, quite often there is a card accompanying the dish telling you what is what. Sometimes, the server just tells you. Or sometimes, both. In this case, we were just left with the card, and no introduction what the accoutrements were, which was a shame. But here are the cheeses on the plate we had:

Lamb Chopper – This Pacific Coast sheep’s milk cheese is a smooth, almost buttery, organic cheese, with a light fruity aroma. The surprising sweetness of this cheese lingers on your palate. Though it might be mild in intensity, this cheese has a great depth of flavor.

MT TAM – Cowgirl Creamery captures the essence of the Northwest Coast with its MT TAM, Cowgirl Creamery’s signature cheese, is a smooth, creamy, elegant tripe-cream. It is made with organic milk from the Straus Family Dairy. MT TAM is firm, yet buttery with a mellow, earth flavor reminiscent of white mushrooms.

Purple Haze – This fresh goat’s milk cheese from Cypress Grove Creamery in Northern California is flavored with lavender buds and wild harvested fennel pollen. The combination of the herbs with the smooth and creamy Chèvre taste is unique.

Flagship Reserve Truckle – Flagship Reserve from Seattle, WA is made when the pasteurized cow’s milk composition is just right. This cheese sings with a rich taste and texture, while maintaining a clean, creamy finish. Flagship Reserve is aged for two full years, giving it a rich, nutty flavor and creamy mouthfeel.

Point Reyes Blue – This Pacific Coast Cheese has a montage of rich flavors made from a blend of pasteurized sustainable raw cow’s milk. The flavor is complex with sweet fresh milk with a medium-to-strong punch of blue flavor. This unique cheese has a semi-soft texture with a silky smooth mouthfeel and a tangy finish. 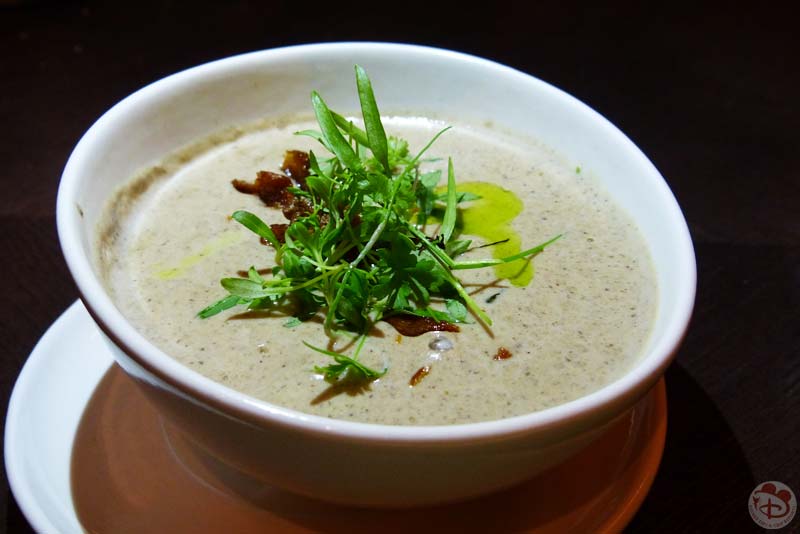 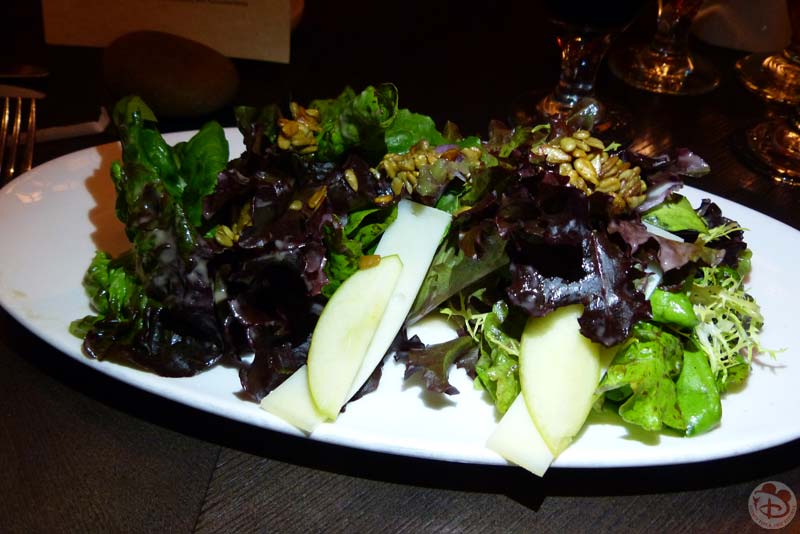 Liam and I had the same main meal. He’s not he most adventurous of eaters, so sometimes, with Signatures we do struggle with finding him something on the menu! But he ate this up! I do believe that the Cedar Plank Salmon is a signature dish at Artist Point, and Steve knew he wanted to order this before we even stepped foot in the restaurant! It is brought out on the plank of wood, and then served up onto your plate in front of you. They were so quick to do this, I didn’t get a photo of that I’m afraid. 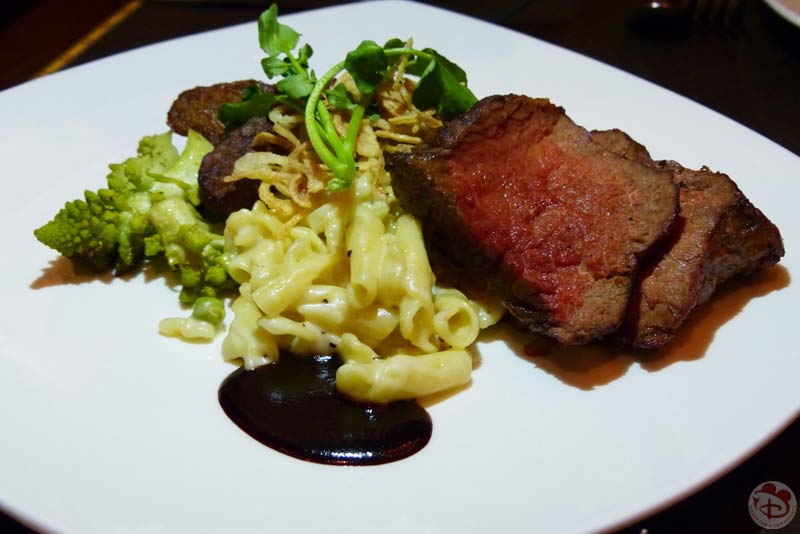 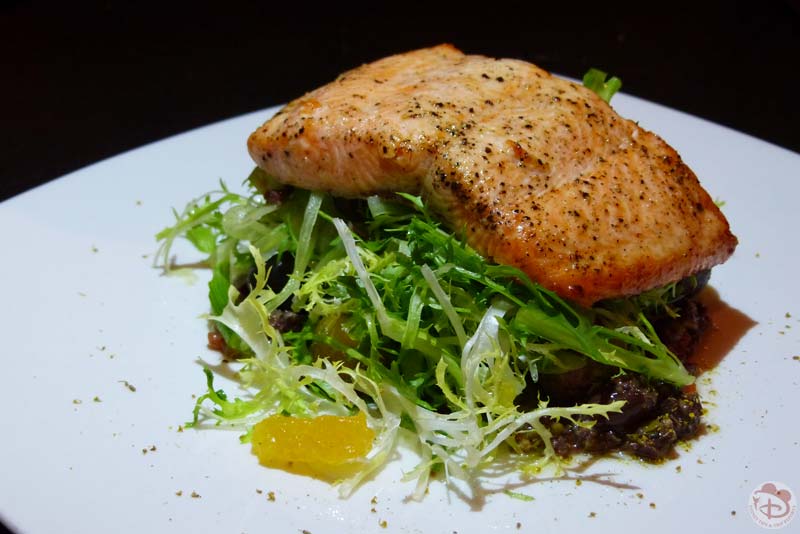 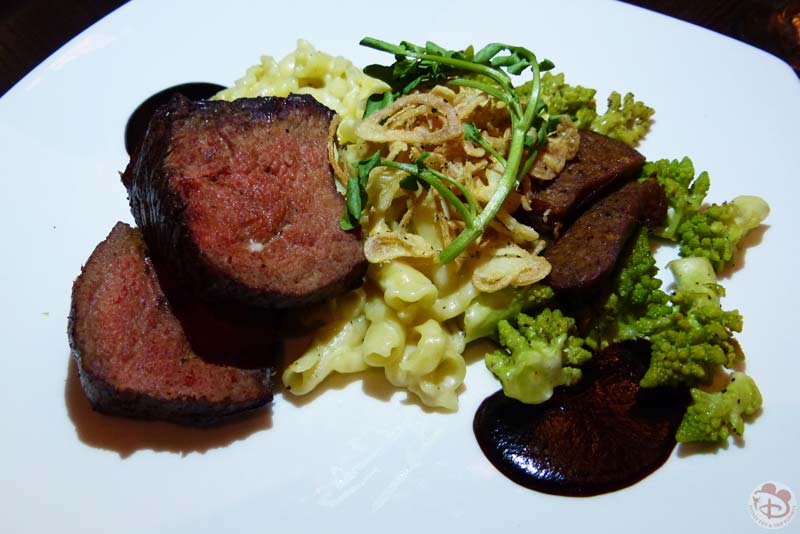 These desserts were fantastic! I was rather full by now, so I drunk up my cereal milkshake (think the flavour of milk that you drink from the bowl after you’ve finished the cereal!) and had a cookie, but wrapped them up to take up to the room for later. The milkshake came in a little glass bottle with a straw, and the cookies in a little paper bag – all presented in a wire basket – very cute!

Liam’s donuts were so good, and looked gorgeous on the plate with the petals sprinkled on the top. Steve’s cobbler was also very pretty, with floral decorations, and some of the biggest berries we’ve ever seen! (One in my hand for scale!!) 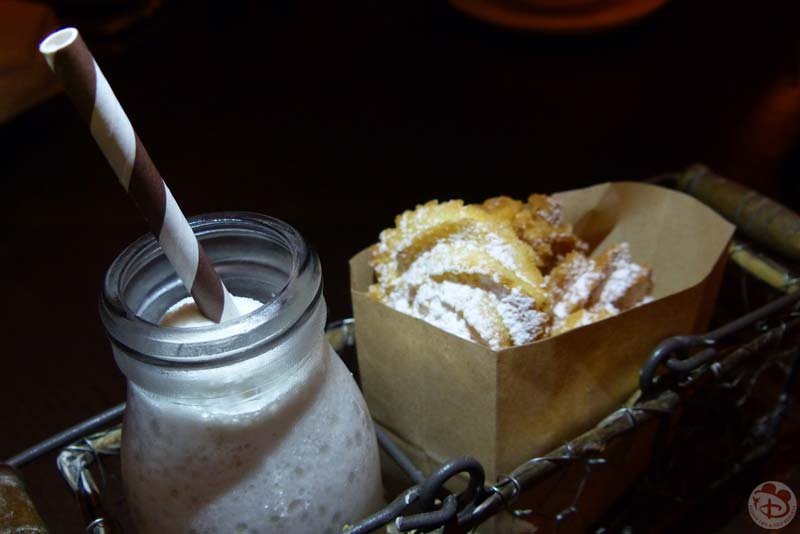 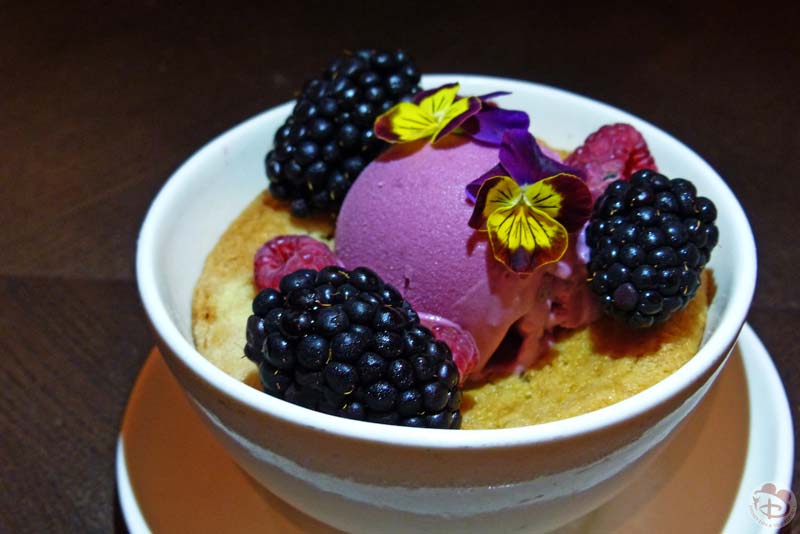 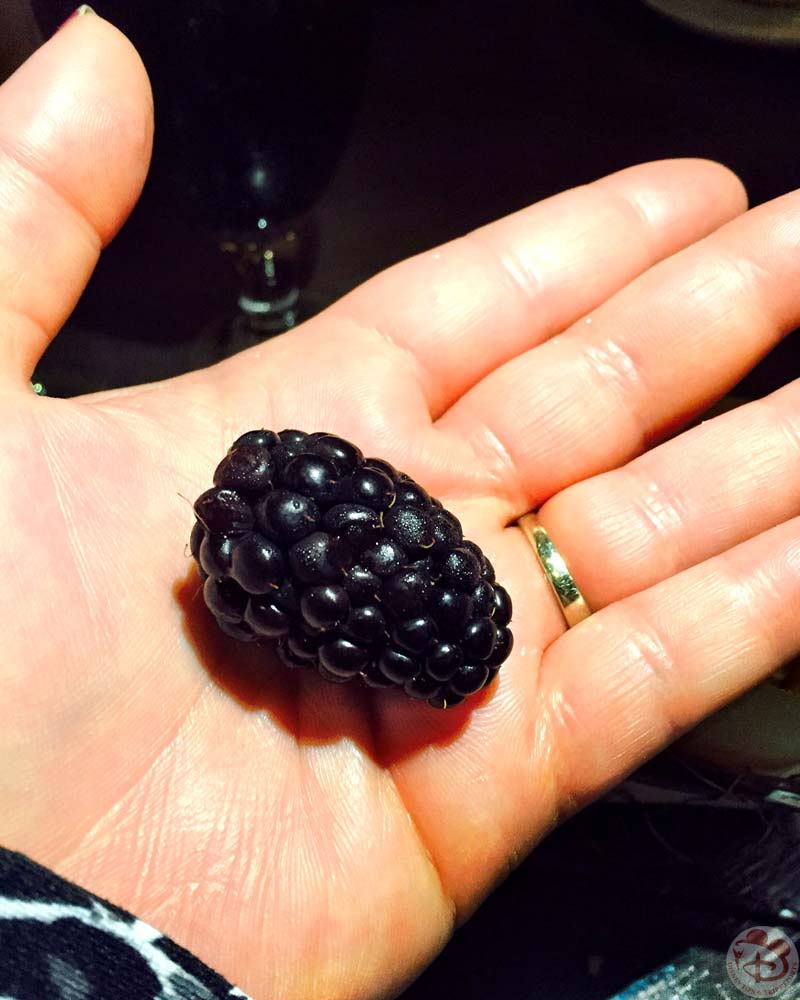 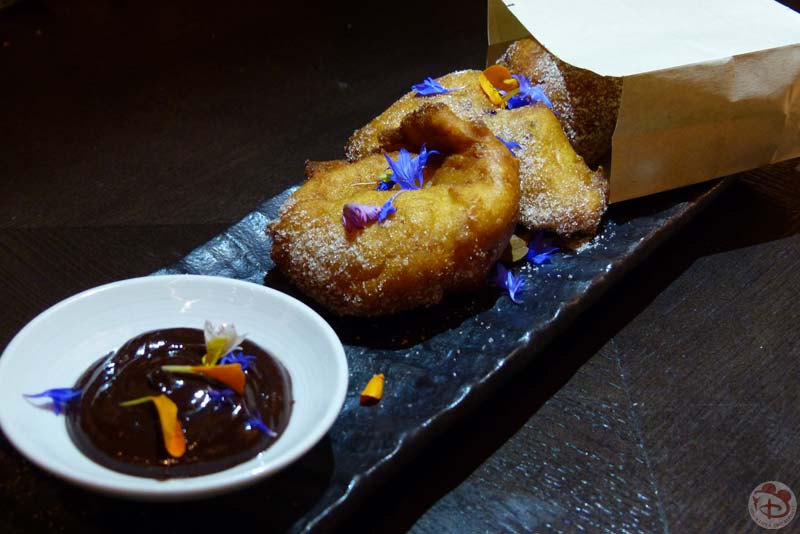 Overall, despite the service, which wasn’t bad, just a bit slapdash, we had a lovely meal here. Steve and I do love the signature dining at Walt Disney World – we see them as a real treat inside the Magic! Liam I think, can take it or leave it, due to him being a bit of a fusspot!

It was nice after diner, to just be able to chill out in the lobby area of Wilderness Lodge (oh my, it’s so beautiful!) and then head back up to our room. No worrying about having to drive back home. This evening, we noticed that there were some decorated pumpkins on display by Cast Members. We discovered more at other resorts too! Very cool – Mickey and Jack Skellington are my favourites!

Read about the day after:
Day 9 – This Is Halloween:
Boma – Flavors of Africa (TSB Breakfast) | Casey’s Corner (CS Lunch) | Mickey’s Not So Scary Halloween Party