If you buy a ticket for Mickey’s Not-So-Scary Halloween Party, but do not have a ticket for Magic Kingdom, you can only enter the park after 4pm. If you have park tickets already, you can enter whenever you like! We aimed to leave Wilderness Lodge at around 4pm to take the boat over to Magic Kingdom. 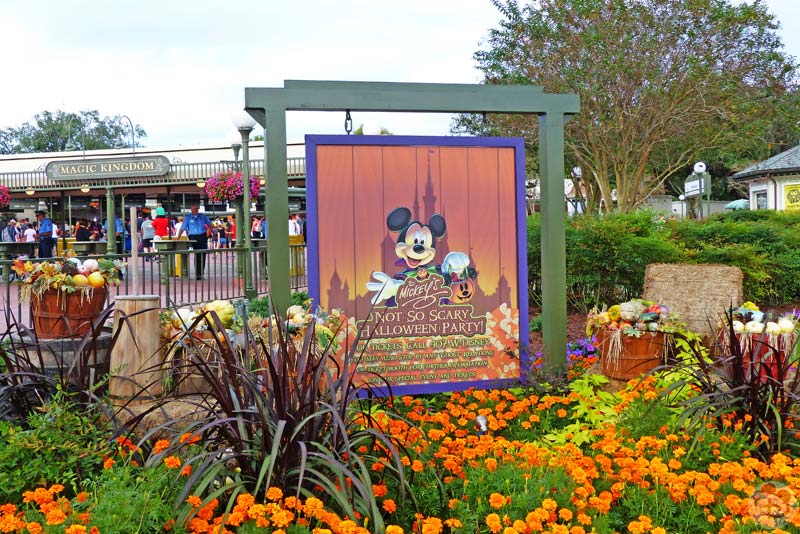 We got ourselves dressed up – Steve wore a t-shirt that said “This Is My Halloween Costume”; Liam decided he didn’t want to wear the Halloween t-shirt we’d brought for him; and me, well, I wore a purple dress, my purple Minnie Ears, my newly purchased Disney Halloween necklace, and earrings, and some purple make-up. Not a costume as such, but definitely more dressed up than I would normally for going to the parks! I got several compliments about my dress though, and that was very nice!

I love Magic Kingdom when it is decorated for Halloween. We’ve seen it this way so many times now (as they start putting up the decorations at the end of August) that it’s hard for me to imagine what it looks like without them! Sadly, we didn’t get a single photo of us as a family between the pumpkin columns at the end of Main Street USA which is such a shame, as I have two of us from previous trips.

Liam was feeling hungry, so we stopped at Casey’s Corner to get him a hot dog and fries. I’ve haven’t got any photographs of that – quite likely because it was exactly what he has had before – so I’ll use that exact same photo! Casey’s Corner is a quick-service/counter-service restaurant. The rules for the Disney Dining Plan are now a little different, but at the time…

When it comes to the Deluxe Disney Dining Plan at a quick-service restaurant you are entitled to one entrée, one dessert and one non-alcoholic beverage for one credit per person.

As for Steve and I, our lunch consisted of a Mickey’s Kitchen Sink Sundae from the Plaza Ice Cream Parlor on Main Street USA, directly opposite Casey’s Corner. This sundae is big enough for 2 or 3 to share, and no where near as big as the Kitchen Sink at Beaches & Cream at Disney’s Beach Club, where it took 7 of us (4 adults, 1 teen, 2 tweens) to finish it off!

The sundae comes in a cute plastic sink, that looks like Mickey’s shorts! It makes a great take-home souvenir! We had three scoops of ice cream: Mint Choc Chip, Cookies & Cream, and Caramel, and it was topped with hot fudge sauce, whipped cream, and cherries. We paid out of pocket for this, and with tax it was £15.97. You can add additional toppings for an extra cost if you like. After we finished it, we washed it out and popped it in our bag.

Whilst we sat and had our late “lunch”, we watched another showing of Dream Along With Mickey on the Castle Stage, the late afternoon run of Move It! Shake It!, and admired the wonderful costumes that people were wearing for the party. I wanted to buy ALL the Halloween metch, but refrained from spending any money on this occasion!

As the sun started to come down, we made our way down to the front of Cinderella Castle to grab a spot for the first outing of the parade, and for the stage show with the Sanderson Sisters from Hocus Pocus.