This was our first ever visit to the Epcot Food & Wine Festival, and whilst the majority of the festival is over in World Showcase, there are decorations for the festival along the way, and the Festival Center is over by Future World East. Disney Photopass Photographers are often found in front of Spaceship Earth, but the line was quite long for a photo, so we bypassed having one done. I did my best to get a few shots without it looking like I was taking photos of random people posing! 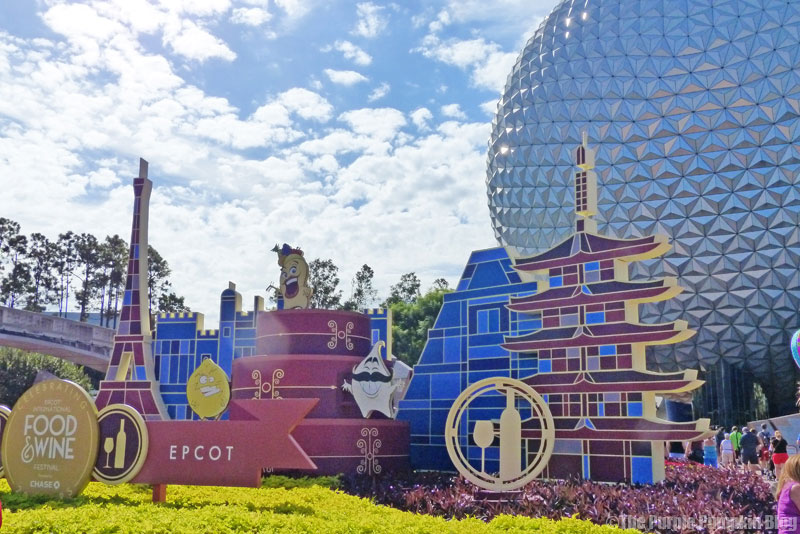 And a visit to Epcot is not complete for me, without a photo (or several) of Spaceship Earth! Every time I see it, I’m always amazed at the structure, and can never get over how big that sphere is.

Along the way to the Festival Center, Liam decided he wanted some popcorn, and I decided I wanted the Halloween bucket for said popcorn, so we bought one. I love me a Disney souvenir! There was lots of things to buy inside the Festival Center, including festival merchandise, artwork, food, and wine. We picked up a festival passport (don’t seem to have a photo of that, but will have to dig it out to show you what it looks like) and walked over to World Showcase, all quite hungry as we hadn’t eaten anything for breakfast.

We walked to World Showcase via the bridge from the Odyssey Center, which is where you could try the craft beers. Along the walkway leading up to the entrance of World Showcase were lots of timeline signs charting the years of the festival, which were an interesting read. I didn’t take photos of all of them, wish I had though.

There was also a very cool topiary of Mickey Mouse, dressed as a chef, standing next to a barbecue grill, holding some skewers of kebabs. There was a Disney photographer here too, but we didn’t line up for a photo – long line again!

We stopped first at the Farm Fresh booth, and used 2 of our snack credits to buy two dishes, and paid in cash for the cider flight, as the dining plan credits are not accepted for this.

Steve had the genius idea this year to bring a dictaphone along with us, so that we could record our thoughts as we ate our way around the Epcot Food & Wine Festival! I thought it would be easier to just put these thoughts into short videos to watch/listen to, instead of writing it all out. It’s good to have this record, because, now that months have gone by since our visit, I’ve forgotten a lot!